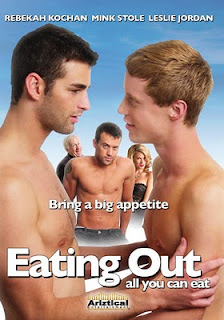 it's always more fun when the boys come out to play, isn't it? my dear friend two-tone, possesor of a gloriously dip-dyed multicolored penis that i have had the fortune of seeing yet the crushing disappointment of never having held is going to join us today and spread a little of his sunshine all over our vaginas.

i take that back. i'm not crushed. because i don't care. and not because he's not totally awesome, but because i'm over dudes and sex and talking and everything else. fuck all this bullshit. i am in a HORRIBLE mood today, which is not abnormal but this shit is worse than usual. i might jump off a building later.

so i hate men. let's just say it and stop bullshitting. i do. hate you all. as a gender. and nothing in particular has happened with one in a very long time, so this isn't some knee-jerk reaction to an acute bout of heartbreak or whatever. it's just sad fact. but i catch a lot of hell for all this nasty man-bashing, so i've decided to throw you boners a couple of bones in the form of some periodic handy tips and advice on how to be a better gentleman. because i know a bunch of smart, hot dudes who can't wait to give you other assholes advice on how to get your shit together yet want no part of an interpersonal relationship with yours truly. and that's fine. less work for me.

god, i hate my life. barf. so while i make plans to go home and sort through my pills to figure out which ones might kill me the fastest and the least painfully, two tone is going to substitute teach class this period. be good, stay in your seats, and SHUT THE FUCK UP. mommy will be back later. or never.


Since Sam is gracious enough to allow me to air some of this shit out with my anonymity (and thus my dignity) intact, I would like to begin our "helpful tips for men" series, if I may. I have promised many sexual favors (no he did not) in exchange for being allowed to be a guest contributor here, so eat this shit up, assholes. Okay, I would like to start with:


THE JOYS OF EATING PUSSY.

Okay, men, you are all aware that the planet revolves around the power of the almighty vagina. That North/South axis shit they tell you in fifth grade is a huge lie. So our lives are a neverending quest to get our dicks wet. An elaborate mating dance. A trade-off.

You listen to her ramble about the bitches she works with or the shoes she wants or whatever asinine, smile-and-nod inducing shit she wants to ramble about, and she lets you play sticky-sticky with her guts.

see?! this is why i don't waste a second of my time talking to a dude about anything that doesn't have to do his stomach or his penis. because HE TOTALLY DOESN'T GIVE A SHIT. so stop wasting your time. this is why i stay on you girls to cultivate and care for and cherish your relationships with WOMEN, because as much as you are convinced that he loves listening to all the boring shit you yammer at him this is concrete proof that he does NOT. his mind is on the xbox, the basketball game, the girl he's fucking on the side...anywhere other than that chick flick you're trying to get him to watch or that fight with your BFF you'd like him to decide who's right (you are, OF COURSE) or how he feels about that new dress you just got (he hates it because he thinks you look LARGE in it and the color is off but he will grunt some sort of noncommittal semi-approval just to get you out of his goddamned face).

they don't want to talk. that's why they're quiet most of the time. and please stop misinterpreting that silence as undivided attention. my favorite exes are the ones who didn't talk AT ALL, because i never had to do or say anything interesting because they weren't ever paying attention anyway. so i just chattered to myself all day, just like i do now with the cat. i don't talk to very many real live humans anymore, and i don't want to. i just pace back and forth around my apartment drinking diet cokes and muttering shit at helen.

man, this is a relief. because sometimes i convince myself that i'm crazy, that men are really gentle, well-meaning souls who just happen to be misunderstood. glad to know that I AM ALWAYS RIGHT. about EVERYTHING.


PARALYZE THAT BITCH SO SHE IS INCAPABLE OF FORMING THE WORDS "STOP, NO, OR DON'T (put your cock in me)." And hey, if she don't say no, it's not rape. KIDDING. Unless you're into that sort of thing.

piglet.
If you follow your boy's advice, you will be impaling her in no time, homie. Now, I've known women for whom you could just blow on it and they would be levitating within seconds. (not sam.) Conversely, I've known women who made me feel like i was trying to decrypt a navajo naval algorithm. (SAM!) But, I am proud to say that I am UNDEFEATED. That's right, bitches. Undefeated. Me are the roughest, toughest, ras-clott pussy eater in the yoo-nited states, seen? Me give bitches multiples for fun, seen? WHO WANT TEST MEH? Heh. Sorry. Just watched Belly on DVD.


Anyhow, where was I? Oh yes. First off, make that bitch wait. Don't just face plant yourself into it and fill out a change-of-address form. It don't work that way. I like to start at an ankle. Drag the TIP (just the TIP, don't go attacking that shit like a dog at a puddle of spilled ice cream; that shit will weird a bitch out) of your tounge SLOWLY up the inside of her leg. When you get to the fun, cream-filled part, make circles around it.

Don't actually lick the fun part yet. Make that bitch wait. Then make your way back down the inside of the other leg, to the opposite ankle from which you began. You can repeat this journey in reverse but be warned that if you do the coast-to-coast ankle sweep (patent pending, motherfuckers) TOO many times, she might punch you in the face, and blood maketh not for good lube, so be attentive. When you feel she is sufficiently begging for it, put your open mouth on the corner of her pelvis and use the TIP of your tongue to lick circles around her hipbones. I've had good feedback on this one.


Okay, so now you have warmed up the motor. Time to separate the men from the muthaphuckin boys, gents. Blow on it. Not like Superman trying to knock Lex Luthor off a cliff, mind you, just breathe heavy on it. Grab her by her inner thighs, yank her legs wide open with authority, and then get to work.

i am compelled to interject here because i disagree with this more than i can adequately express. please stop blowing on our soft meat, gentlemen. PLEASE. it just makes it cool off and stop working, which makes your job TEN TIMES MORE DIFFICULT. so don't do it. it's not a hot bowl of soup that needs to be cooled, it's a vagina.


Maxim magazine ran an article in 99 that summed it up best: pretend it's the last ice cream cone on earth. It's a sensitive area, dudes. Less is more. This is the part where all women are different, so be attentive. Some women like the middle finger about 3/4 of the way up and curled toward you. Some women like a finger or two in their butt while you are maxxing their shit. Most of them like when you actually penetrate them WITH your tounge.

none of the above. tongue to the left of the clit, on the g, keep pressing there until i'm done. which will probably be in two or three years, because you are probably mentally retarded.
The Clit Jump Manuever.


If you apply enough pressure to the clit with the first 1/3 of your tongue, and gently slide your tongue from side to side, and eventually the clit will jump from one side to the other. Simple physics. If you hear a "yip-yip-yip" that reminds you of a kicked Yorkie, congratulations. You have just successfully executed the Clit Jump Manuever. (Again, patent pending.) And the in-case-of-emergency-break-glass fallback is, if you can manage to multitask, you lazy fucks:


Do the above clit jumping manuever WHILE GENTLY SUCKING ON IT SIMULTANEOUSLY. I have assassinated more than one bitch who claimed she didn't like getting oral with the above technique.


And men, if you are gonna do it, DO IT RIGHT. (for reals, dude. do your fucking homework.) You know how much it SUCKS when a girl is blowing you and she does the whole "stop to tuck her hair behind her ear" thing or stops to tell you her jaw hurts? Kinda sucks, right? Because then she has to START ALL OVER AGAIN FROM SCRATCH. Well guess what. That goes both ways, homie. I don't care if you have a mouthful of her girl juice, YOU SWALLOW THAT SHIT LIKE A MAN AND KEEP GOING. I don't want any of you guys out there doing a bullshit job of going down on a woman and saying you learned it from me. Y'heard?

i just want to reiterate here that "breathing heavy on it" is the sexual equivalent to the "stop to tuck her hair behind her ear hurt jaw thing." okay. that is all.


Follow my advice and you will have a pleasantly paralyzed woman to play "hide the fun stick" with to your heart's content. Well, I hope this has been fun and informative, men. Now I send you out into the world to practice your newfound abilities with confidence. Go forth, padowans, and paralyze these bitches so hard their unborn grandchildren need a cigarette.


Ladies, PLEASE cut back on the cheeseburgers. A mature man doesn't mind the musky lady scent, lord knows I have found myself making duckface just to smell my top lip and grin after doing the deed to one of y'all, but seriously, cut back on the greasy food, plz plz plz kthnxbi. I once ate out a vegetarian girl and she tasted like straight strawberries. It was a delightful experience. But some of y'all need a bath and a nutritionist, f'reals.

i might be one of these bitches who needs a bath and a nutritionist. sigh. but cheeseburgers taste like heaven fried and smashed between two slices of sourdough, so i'm going to have to disagree. for serious. i just had a cheeseburger for lunch today. i've told you all before that my shit smells and is hairy and i am never changing anything about myself for a man ever again (let's pretend that the opportunity might present itself ever again), so if that's what it takes i guess i better get some more cats.


Until next time, my friends. I should mention that I am under exclusive contract to bitchesgottaeat, so if you want to get at me, you've gotta go through Sam.


Tune in next time, when we will discuss premature ejaculation, and a little something I like to call THE MARLON BRANDO METHOD.Until then, keep it 100 y'all.And I'm a ghost.