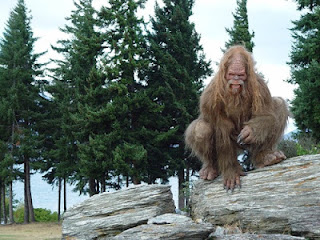 for as long as i can remember, my thighs have touched. i was a super fat chunk of a baby, and i was the fattest fucking little kid. the "baby fat" I was supposed to have grown out of by the time i got to high school was stubbornly adhered to my chin and ass that first day of class, and i ate every single one of those fucking bummed out feelings that overtook the lonely and incredibly melodramatic teenage years of my life. usually stuffed between two slices ofbuttered bread. or dipped in delicious, delicious chocolate. that i washed down with a milkshake.

i was still a kid when i first figured out that i am ugly. this was in the1980s, back when there were still real-looking people on primetime television and magazines weren't saturated with women made of cocaine and photoshop who set an impossible standard of unobtainable beauty, so it wasn't glaringly obvious what a hideous little beast i was. i can't imagine being a female child in this new millenium in which half-naked celebrity ass is perfectly acceptable and readily available on the sides of buses and shit. i am a slave to sugar and cheese and totally in love with this new trend of putting bacon on every goddamned thing on the menu, and i have never been shy around a plate of food, but if i was seventeen years old and basically a walking open wound and i was being plagued by images that reinforce the idea that as i am i'm not good enough, i'd have a fucking eating disorder. bulimia probably, because anorexia requires the kind of restraint and self-control that, as is evidenced by the thunderous clap of these thighs, i am obviously lacking.

so i was five years old, and i could read really well. i'd been reading since the age of two, had tested into kindergarten early, and was five years old in a second grade classroom for advanced readers. i was pretty emotionally underdeveloped, and the differences between ages five and seven are substantial; i sucked my thumb in public, wet the bed every night at home, and cried at the slightest provocation. my hair was never combed, and i had a fat little belly and A LAZY FUCKING EYE. i was basically the kind of tragic piece of shit bullies wish for when they say their prayers before bed, and my cause most certainly wasn't helped by having a late in life mother who didn't believe that children needed to be fashionable and sent me to school in mismatched pants and shirts with stains and iron-on patches on my pants. because an education was more important than my having the inspector gadget t-shirt i wanted, apparently. teachers adored me because i spent recess on the floor next to their desks working on my punctuation because i was terrified of the playground equipment, and my classmates enjoyed stealing my little kid glasses and hiding them in the boys' bathroom, which i could not go into because boys are gross and it's against the rules to go into the wrong bathroom so i would spend the day squinting at the chalkboard until the janitor finally found them and brought them to me. which eventually resulted in my having to wear them strapped to my head at all times. totally fucking sexy.

we were really poor, and most of our food came from boxes and cans. i should specify, before your minds start to fill with television images of the barred windows and chain-link fences meant to contain overpopulated project housing developments teeming with children whose only option is potato chips for breakfast, that i grew up in a really nice suburb. we had art in school. and music. a swimming pool. fucking tennis courts. my mother had a college education. but she was severely disabled, and the two of us lived on less than eight hundred dollars a month in government aid. and when survival is your imperative, what you look like while doing so becomes of increasingly diminishing importance.

"samantha is ugly and smells like pee" was the reason some kid gave for not wanting to be spelling partners with me one afternoon. now i'm not so arrogant that i won't entertain an opinion contrary to my own, and between my threadbare corduroys and the flesh-colored eye patch i had to wear to fix this goddamned stupid eye (which was caucasian flesh-colored and totally fucking obvious) and, considering my salvation army, unwanted donated clothing, overall disheveled appearance, i conceded that the gentleman might have a point. i was ugly. i could never find pants that fit me at kids r us. and i probably did smell like pee. it was true, and it didn't bother me all that much. i mean, it sort of did, because we are reminded from birth that girls are supposed to be pretty and delicate, but i came to terms with my ugliness relatively quickly. i knew that if i was ever to be rescued from a goddamned tower prince charming better have done some motherfucking push-ups beforehand. and that was only if i didn't cause him to burst into flames with the thick glasses that covered my entire face first.

so i took my spelling workbook to a table in the back and sucked my thumb and finished it by myself. that day and every day that followed. i knew that boy couldn't spell the word "concentrate," and i totally fucking could, and i have never and will never worry about the insults spewing forth from a mouth connected to some subhuman shithead of inferior intelligence. i had no problem working alone rather than wait for that dead weight to sound out his vowels because i, of course, was a obviously genius. UGLY i could live with. STUPID was another story entirely. and my acceptance has nothing to do with self-esteem, either. i don't need anyone to rush to the aid of my precious feelings and reassure me that i'm adorable and gorgeous and just not looking in the mirror the right way. i don't need self-worth from a superficial place. so no knee-jerk female assuages, please. no "but look at those dimples!" or "what about your beautiful earlobes?" or "the second finger on your left hand is absolutely stunng." GAH.

being ugly affords you a unique sort of freedom, and as i progressed through school the more comfortable i became with how effortless some aspects of life are when you aren't considered physically attractive. eating whatever you want is fucking amazing. so is being able to shave your head at sixteen because you're goddamned sick of curling irons. you can be a jerky smartass without having to worry about offending someone who might otherwise want to stick his dick in you. i went to school with a lot of gorgeous girls, girls i was friends with who breathlessly recounted their first kisses and first blowjobs and first sexual experiences to me between classes. it stung, for sure, because the potential sexual interest of post-pubescent young men is the currency of female youth and to never have been kissed as a junior in high school is fucking devastating. but beauty is kind of this fixed thing. at least conventionally, and either your face and body are constructed in a way that fits those parameters or they don't. it's pretty clear whether you are or not, and the availability of your friday nights are an indicator that will clear up any confusion, and when you decidedly ARE NOT there isn't much you can do to change it. unless magic is a real thing. and don't get me wrong, i wasn't some soulless cyborg who was immune to the fact that i spent entire weekends in my room listening to mazzy star (HOLY SHIT) and reading. but once i'd drawn the conclusion that the face and body i was born with were the reason why i had so much extra study time, i tried to stop feeling so bad about it. and got a near-perfect score on the fucking ACT.

i was diagnosed with crohn's disease when i was 25 which, as autoimmune diseases go, is one of the least glamorous of the bunch. it has ruined my joints and causes me to have diarrhea all the fucking time, and i'm not sure if there is anything less beautiful than a woman with half a colon limping along ten feet behind you while shitting an adult diaper. but i'm not such an asshole that i don't at least try to gild the lily a little bit sometimes. even as hopeless as my physical situation might sometimes be, right now i have makeup on and a spanx stretched from my ass to right up under my goddamned bra. because it seems too sad to just not give a total shit. i'm not sure that there is a time that i really feel beautiful. i still have the same face, the same eye that is a dead giveaway when i'm tired, the same skin beard, the same weird dark spots and unexpected patches of hair. at 32 i still haven't matured enough to not enjoy the validation of someone wanting to get naked in my bed. if I somehow can club a decent-looking dude overthe head and drag him back to my apartment, i still don't feel particularly beautiful. proud of myself? yes. irritated that i still kind of feel like shit and that this dude who could've given me chlamydia hasn't solved a single one of my problems? absolutely. but i do always feel SMART, and FUNNY, and HONEST, and BRAVE. beautiful has never been in the top ten things i've ever aspired to be, and that has made survival while not being so infinitely easier.

no one has ever given this face anything other than a hard goddamned time. i've had to work my goddamned balls off, to rely on my brain and my talent, to manipulate and trick my way out of trouble, and to win people over with a well-timed punchline because what i look like has never done any of that dirty work for me. i've had to cultivate a personality, learn to be nice when i don't necessarily want to, pay attention to shit i don't care about, work well with people i would rather see dead by the side of the road with a grizzly bear actively disemboweling their carcasses. i am bright and strong and capable; and hopefully there, within those traits and skill sets, is where my real beauty lies.

*last night i spoke at the the university of illinois at chicago at a student-led project called ask big questions. the topic of our discussion was "when do you feel beautiful?" above is the answer i shared with them.
Posted by samantha at 4:02 PM